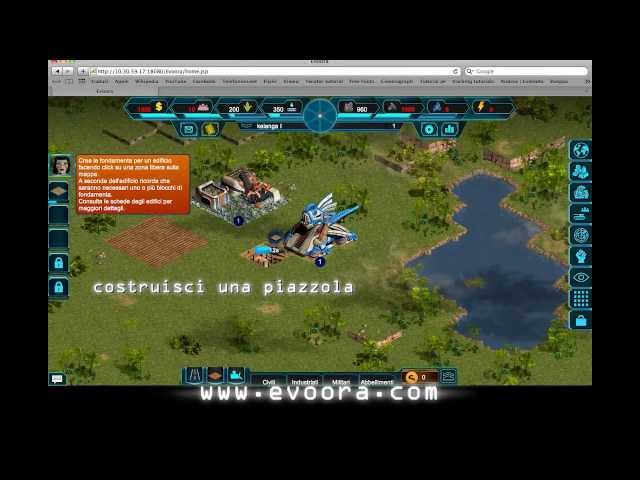 I was very happy to have found a development studio engaged in making a game in Trieste, my hometown. By pure chance, I saw a job request and within a few days, I was already busy working with them on this new game. Evoora, that was one of the first browser game to have a multi-layered 3D engine entirely developed in-house from scratch.
The project was to develop a massive web-based RTS hosted on private servers and usable by as many people as possible. All the initial graphic style had been chosen to take the architecture of Central American civilizations as inspiration. Somehow their civilization had migrated to the stars and grown.
Following my passion and the dream of being able to work in my city, I dedicated myself to the aspect of the game starting as a simple modeller and becoming both game designer and art director.
I created concepts and prototypes for the UI in Illustrator and Photoshop, created models of structures and elements and provided new ideas to make the gameplay more varied and fun.
After many iterations and many tests, the game finally reached a certain feeling and a certain soul by preparing for its first public release as public open alfa.
Unfortunately, the choice of times and the lack of initial implementation of English as a selectable language had a bad effect on the opinion of users. We managed to have a good turnout with little publicity, quickly reaching about 2,000 players online at the same time.
I have worked day and night in long crunch time in Maya, 3D Studio Max, Zbrush, Illustrator and Photoshop in this project. I always remember this experience as one of the many that have helped me in my life choices.